Big shouting in the children’s room: the new play box has lost its lid. Not a pretty sight, because the hinge screws were torn entirely from their anchoring. Can that still be cemented somehow? Why surely! The solution is to repair putty. These instructions show how torn screws can be repaired in the shortest possible time and without major feats.

The furniture in the children’s room has to withstand a lot of stress. Soft fiberboard is not always the best choice as a building material. Today’s ready-made furniture rarely does without it, and so doom regularly takes its course. The new play box didn’t have to suffer for long either, and its lid was torn off. A closer inspection shows that the retaining screws of the hinges are entirely torn out of the material in one piece. All that remains are gaping holes.

Fortunately, the play box doesn’t have to be written off just yet. Because there is a simple solution for such repairs. In the following, we show step by step how to repair torn screws. All it takes is just a little repair putty.

Well, of course, you can’t do it without tools. However, only a spatula, cutter, screwdriver, and pencil are required to repair the torn screws.

The most important tool, however, is repair putty. This 2-component epoxy resin compound is mixed shortly before use, whereupon it hardens in a short time – ideal for filling imperfections. The mass adheres to wood, metal, and even glass. The repair putty is available in every hardware store but also from  Amazon for around $ 8. Also, new screws are also required in the present case, because the old ones, unfortunately, remain lost. Chipboard screws with a length of 12 mm are suitable replacements.

Note: Gloves should be worn when handling repair putty.

To reliably repair torn screws with the repair putty, the breakpoints on the lid of the toy box must first be cleaned. The torn screw holes are cut out deeply with a cutter until all splinters and flakes have been completely removed. The soft fiberboard does not offer much resistance. You have to be more careful here.

Now a suitable piece of repair putty is separated from the rest of the putty with the spatula and thoroughly crushed with the fingers until a uniform blue mass is formed.

Touch up missing parts of the composite panel with repair putty

The following work must be done quickly because you only have 4 minutes to shape the clay. So the mass is pressed into the flaws of the lid like chewing gum without fuss and shaped to fit with the fingers. If the gaps are completely filled, the protrusions can be sheared off with a spatula or cutter so that a flush surface remains.

Tip: To hide the repair work, the patched areas can be sanded off and then painted over to match. In this case, however, this is not necessary, because the hinges will later cover the patchwork.

It is already becoming apparent that repairing torn screws is not a significant problem. To re-determine the position of the hinges, the lid is held in the correct position on the toy box. The outlines of the hinge plates are drawn to match the lid, and then the hinges are unscrewed from the toy box.

The hinges are now screwed onto the lid first. Since the putty has not yet fully hardened and only comparatively narrow screws are used, there is no need for pre-drilling. The chipboard screws are screwed directly into the repaired areas.

The hinges are firmly back on the lid! This only has to be screwed back onto the play box. Once that’s done, two centrally positioned locking springs are waiting to be screwed in again. If available, these should not be forgotten, because thanks to them, the lid cannot simply close from the open position.

But now it is done, and the repair of the torn screws can be booked as a complete success! After 24 hours, the patched areas are then hardened to the point where they can be fully loaded again. And the toy box can patiently endure so many strains. 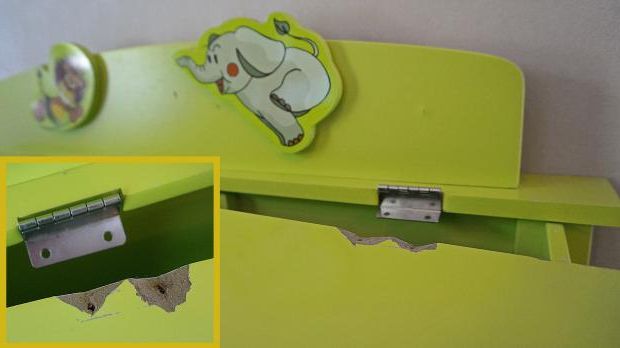 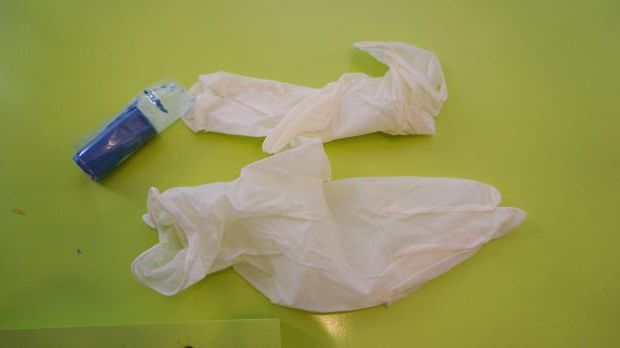 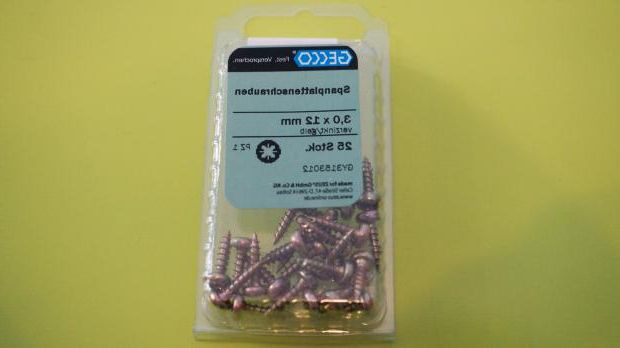 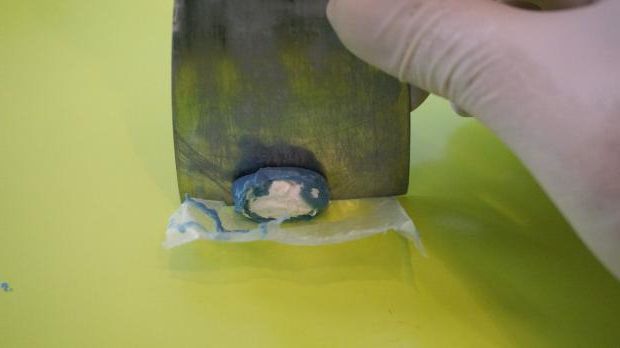